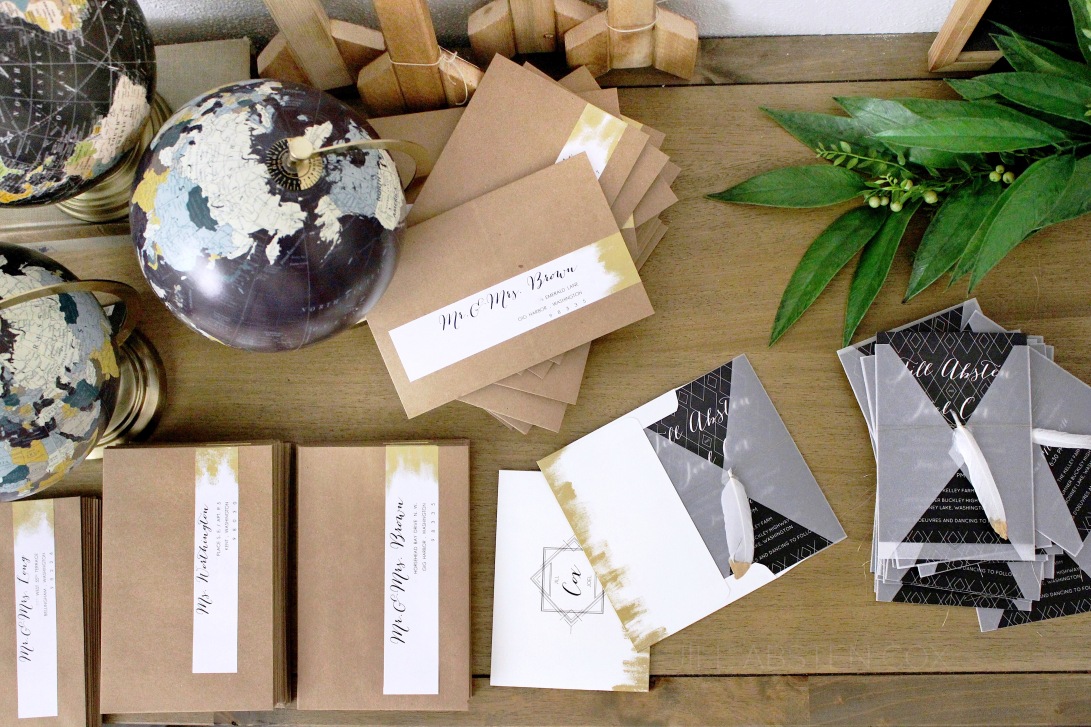 Our Wedding is now featured on SeattleBrideMag.com!

A wedding invitation is an important step in establishing a theme for the big day. It is an opportunity for the couple to express themselves creatively, to highlight their personalities, and most importantly it is a chance for them to communicate to guests what the tone of their wedding will be. It truly is the events first look.

When it was time for Joel and me to send out our wedding invitations, I knew that the best way to get what I wanted would be to create them myself. I must admit, I was hesitant going into the project. I was aware that in order to create 200 invites, it would require me to repeat each step 200 times. It is amazing how something so simple, like brushing a bit of gold over a corner, can turn into an enormous task. After careful deliberation, I decided to put on a brave face and I headed down the DIY path.

I created a list of questions to help me stay focused and to form a clear theme.

Keeping this list of questions in mind, I completed the following steps: 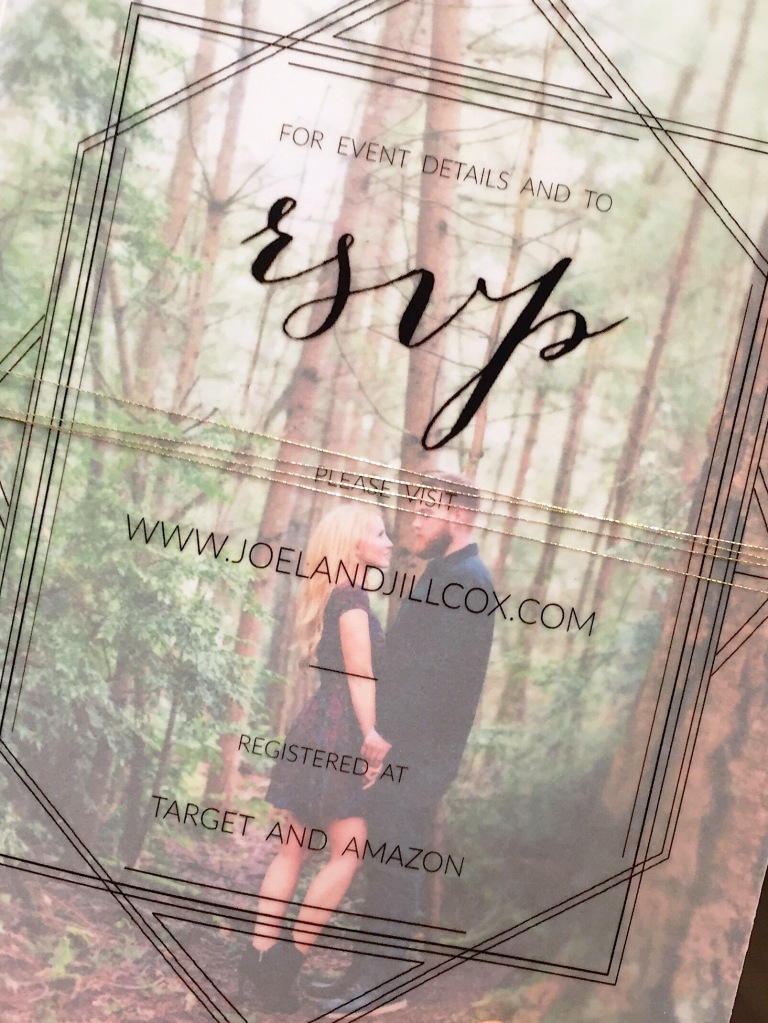 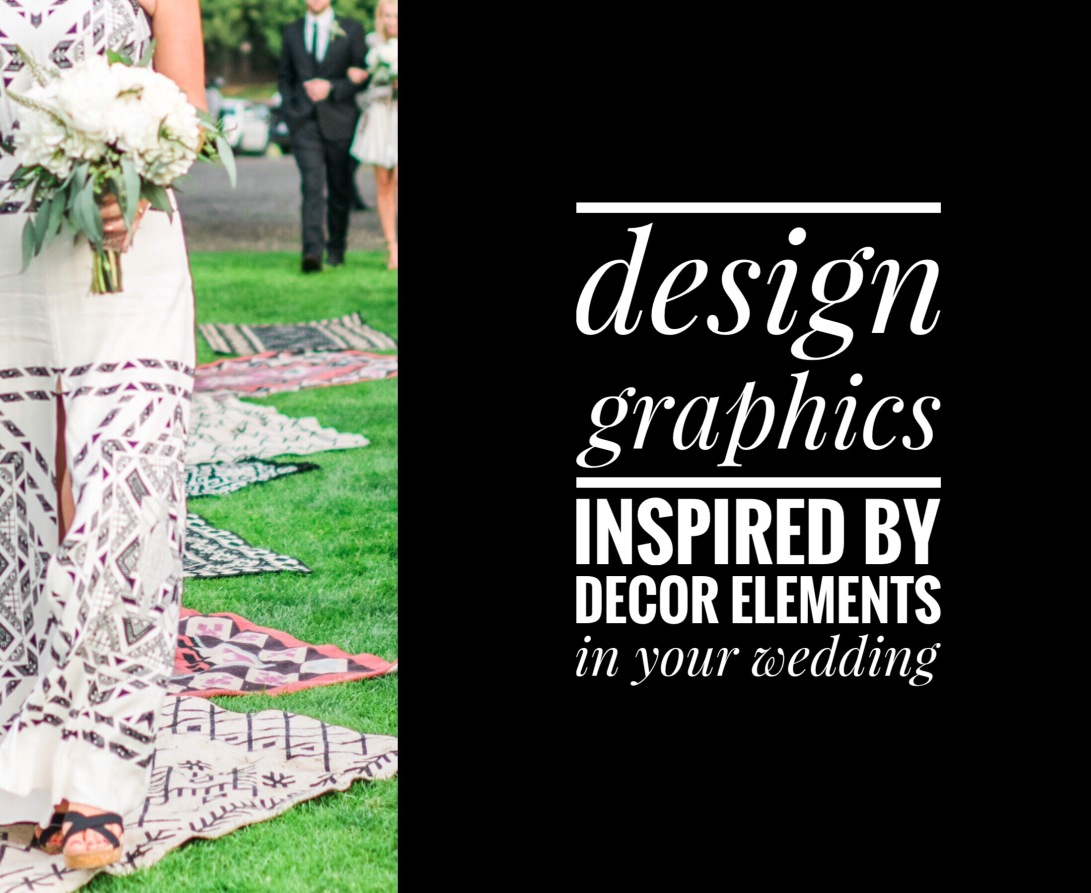 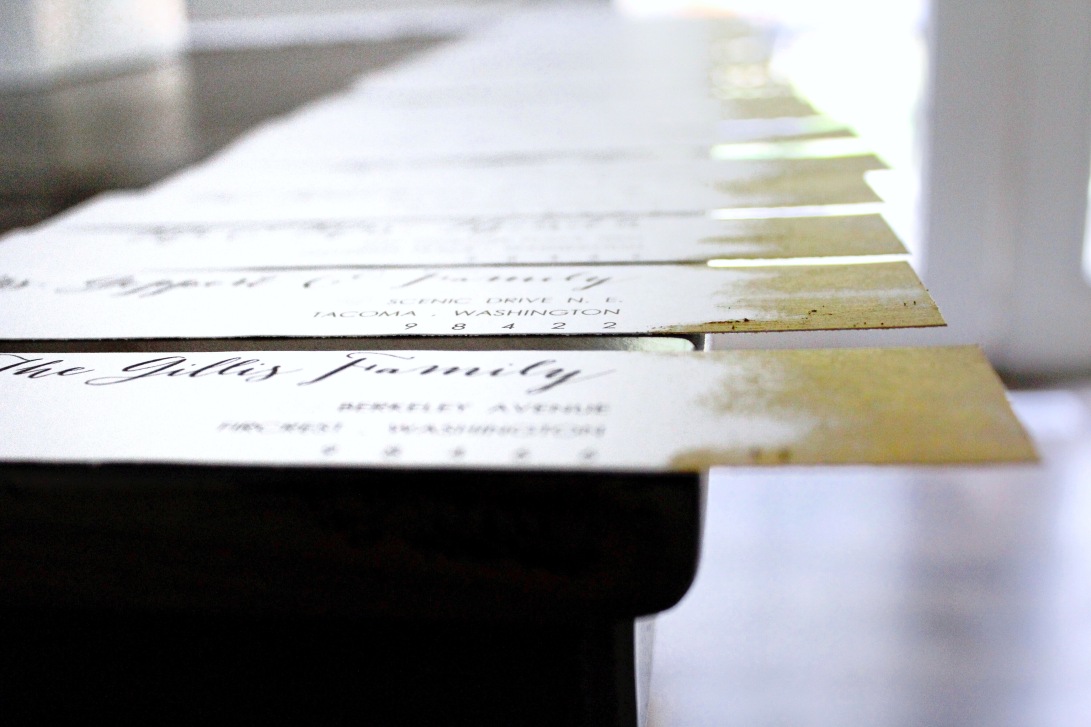 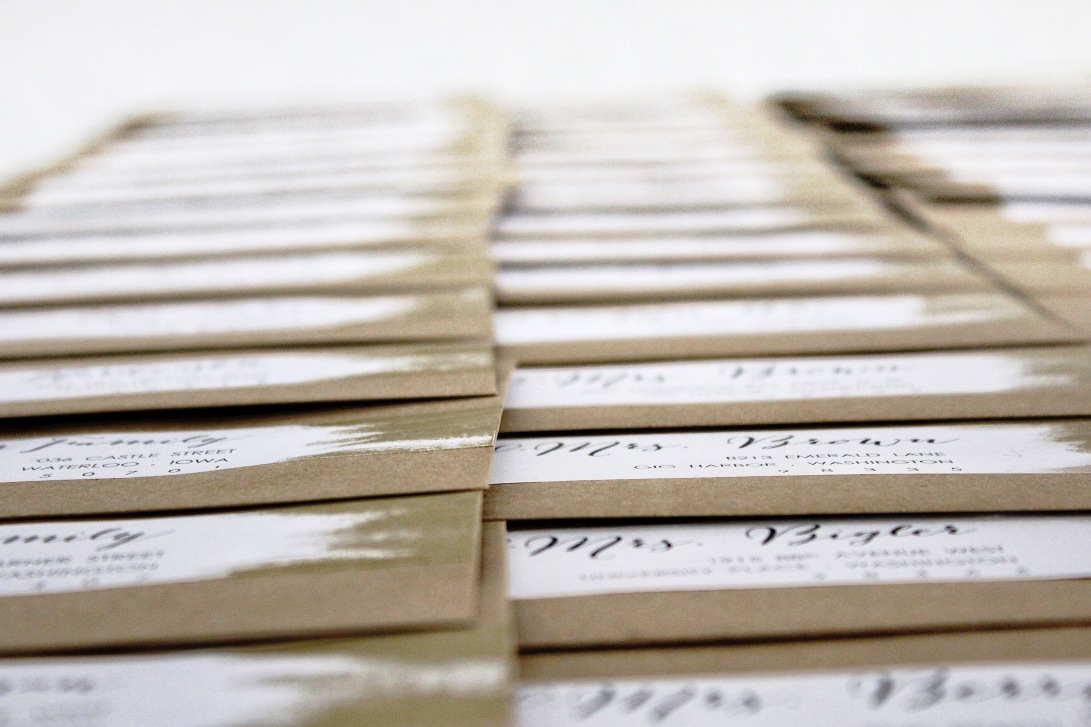 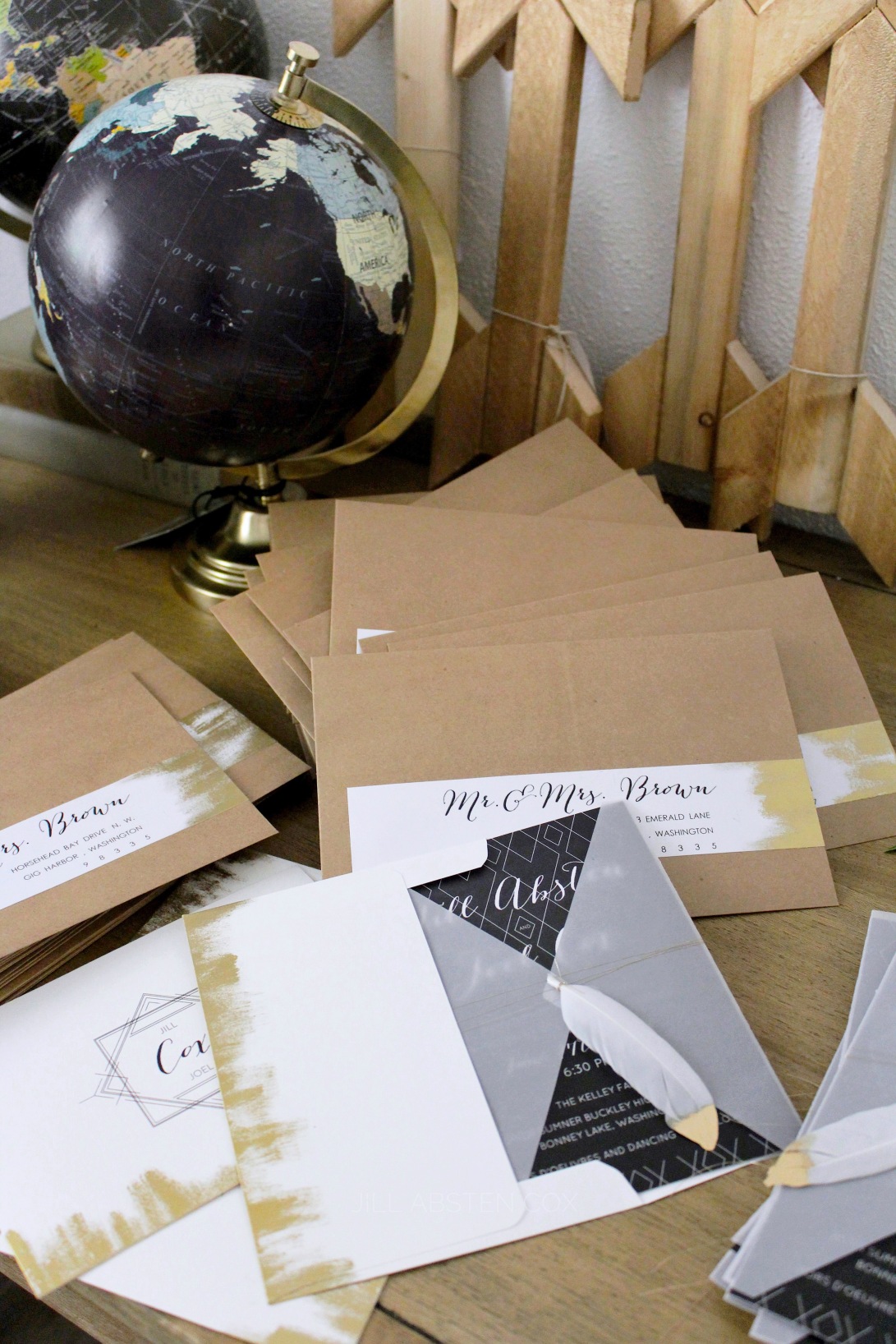 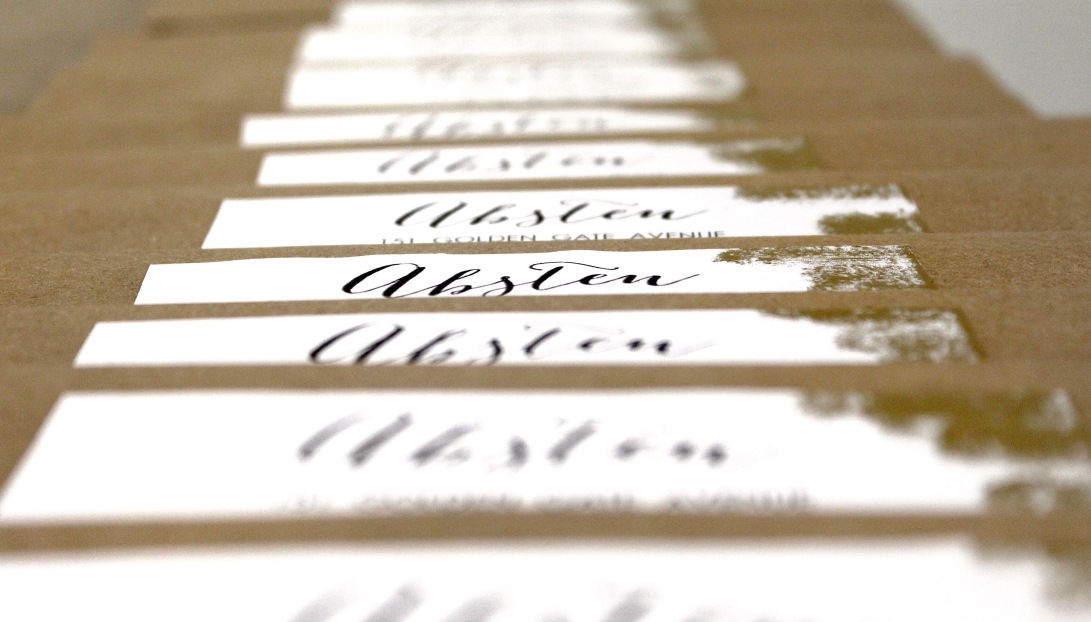 The Engagement photo and the two detailed images of the bridesmaids dress & cake were shot by @Brooke.A.Summers

Like most brides, I wanted to go the extra mile to set the scene at my wedding. As a kid, before my years as a florist and an interior decorator, I worked for a catering company. I suppose I was over-exposed to the standard catering set up, bar trays and piles of plates. I wanted my day to have a more authentic rustic vibe. One of the ways I achieved this was by eliminating the typical catering equipment. I didn’t have the budget to buy a dozen wood trays (averaging $30-$50 a piece), so I made them myself.

It was so cheep and easy! 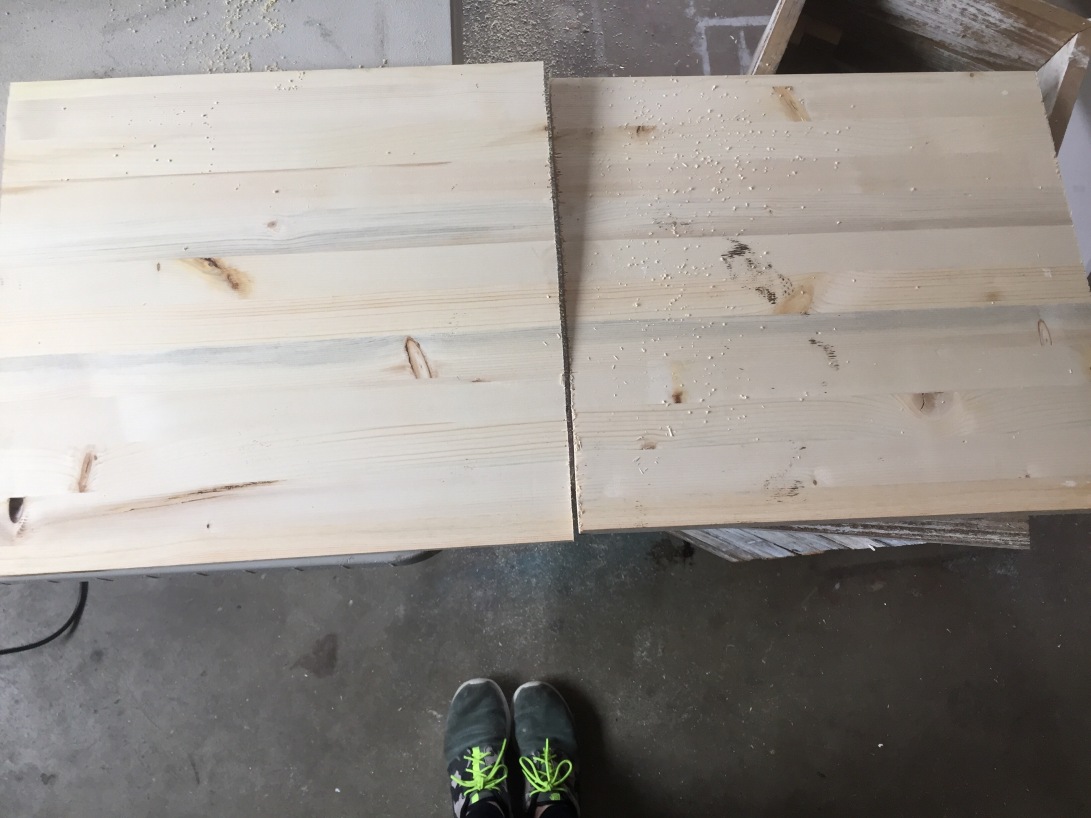 Cut the board to desired size. Our table saw was already being used at a renovation project, so I used a jig saw. The 1 inch wood is thin enough to make the cuts. I used a spare 2 x 4, clamped into place, as a guide for the cuts.

Make the octagon design. Set the chopsaw to 45 degrees, and slice. Repeat on all four corners. 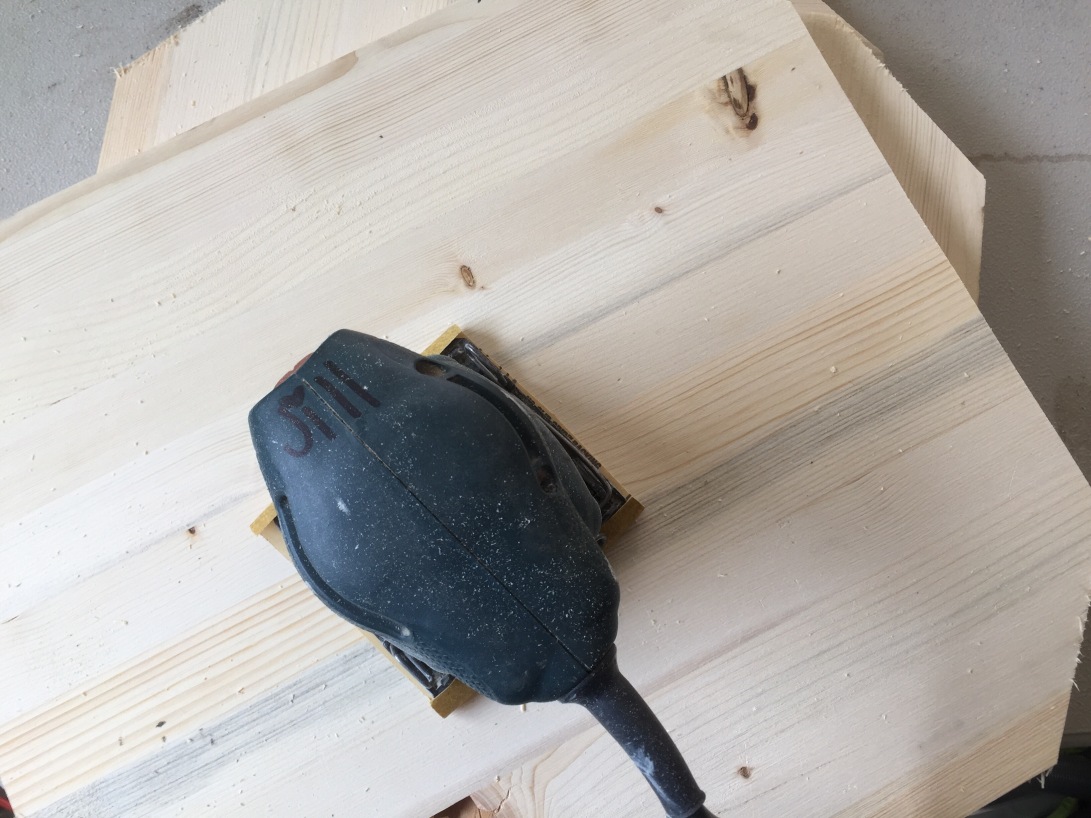 Stain is a beautiful touch for decorative cutting boards only. I plan to use these boards as serving trays at our wedding, and then later as accent pieces in our kitchen. If you are planing to actually chop on these boards, I suggest skipping the stain.

Allow the boards to dry over night.

Clean the boards, and finish off with an organic oil. My favorite is an all natural butcher block conditioner that I found on Etsy. My tip for selecting wood conditioner is to read the ingredients (obviously), if the products are edible then you’re good to go.

Here’s a look at the finished product!

Check back soon for updates on where these boards are now.

A couple of my favorite pictures from our Northwest inspired engagement photo shoot. Featuring the talented work of Brooke Summers from Tacoma, Washington. 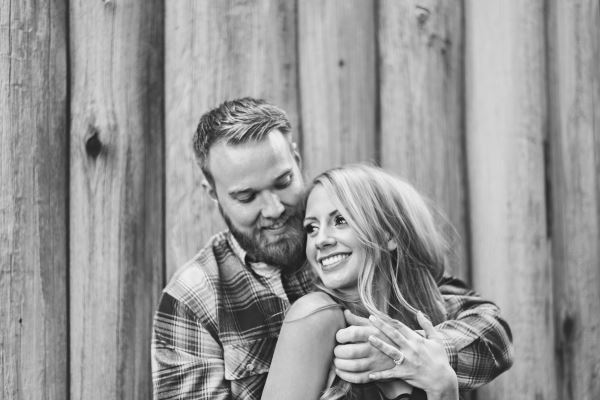 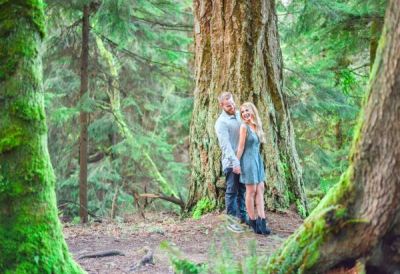 It is time to officially invite our friends and family to be a part of our wedding party! I’m kicking off the celebration with some custom bridesmaid invitations. Nothing says “I love you” quite like handmade.

I decided to made the most of this opportunity, and created an invitation that was both a gift & functional.

I designed an accordion style card, by attaching multiple pages together. Each page included important details about the wedding; the vibe, the attire, and the accessories. I suppose I could have just sent a text, but this is more fun. 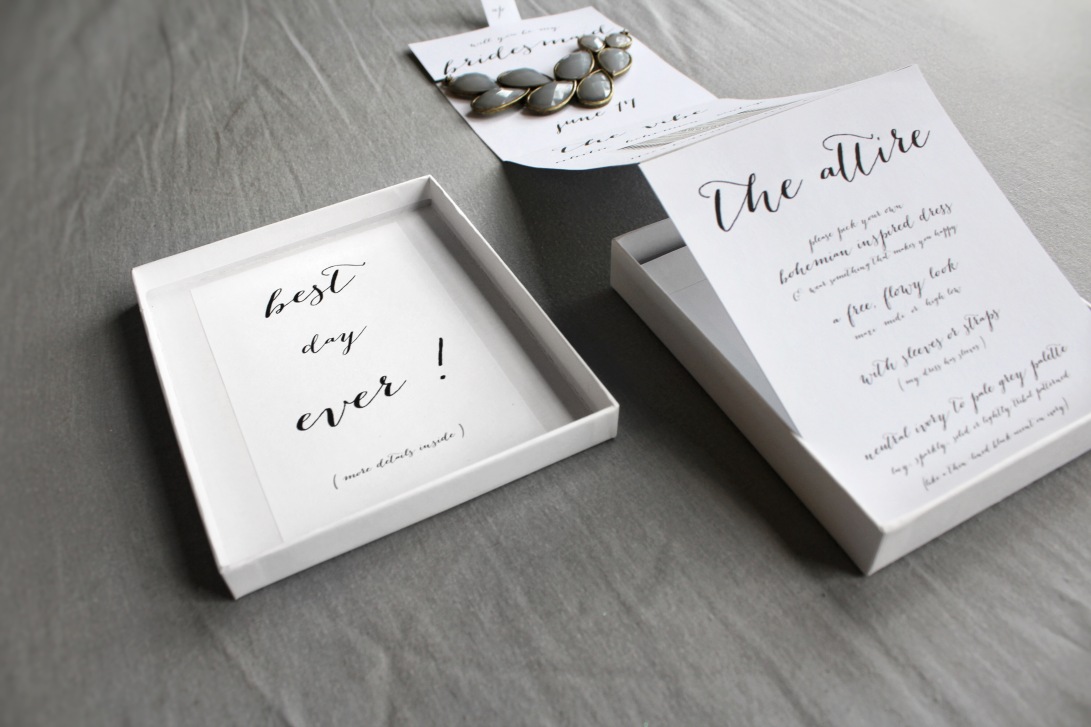 I’m opting to go a non-traditional route with the wedding attire. Each bridesmaid will wear a different style dress. This mismatched trend has become popular in the last couple years. Most brides ask their ladies to wear different necklines & hemlines, but keep everyone in the same color. In my case, I’m going a step further. I plan on having the ladies wear a range of nuteral tones, from ivory to soft grey, in various patterns and materials. The goal is to have the overall styling be a cohesive look. I discribed my wedding as “1920′ bootlegger meets 1970’s free spirit”.

Necklaces purchased from World Market are a great gift and fit my eclectic bohemian theme. Partnered with a headband, the statement necklace will help tie the girls looks together & will set them apart from the rest of the guests.

To attach the necklaces; I cut slits into thick card stock, then slipped the chain through. To hold the chain in place; I used large sheets of white adhesive label paper, cut to size.  This created a smooth surface on the back of the card. A more professional, polished look.

A little special note at the bottom. 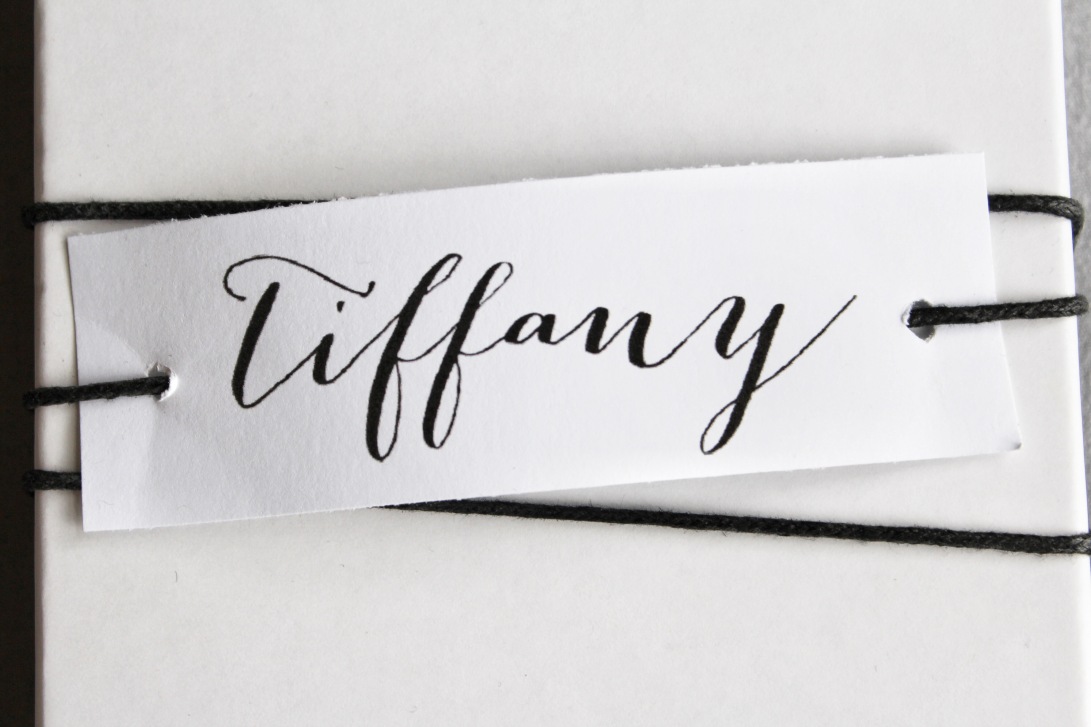 I went a different direction on the outside & use a soft cursive font. I want the packaging to feel like vintage-postage.

Now for the finishing touches. Could this be any cuter?!

“Brown paper packages, tied up with string. These are a few of my favorite things.”

Thanks for following! Stay tuned for more Design & DIY project updates as we prepare for our biggest adventure, our wedding  day!

We interrupt your regular scheduled broadcast to announce; We’re Engaged!

Okay… We have been sense January 17th!

I’ve been so busy, I have not had time to blog about it! My days have been filled with the usual wedding prep work; picking invitations, hand writing addresses on envelopes, collecting accessories, decorations, accent furniture, building props, and lots and lots of time on Pinterest!  In the mist of all the Pinning the thought finally occurred to me “why am I not blogging about this?” I know it is not a home decor topic, but when two house-flipping, HGTV-watching, DIYers plan a wedding…. Well, you know.

To catch you up to speed:

Joel proposed in Disneyland! We were front row center at the castle for Disney’s 60th Anniversary Diamond Celebration. The firework show had just wrapped up, and we were taking a moment to let some of the crowd clear. The place was packed. We all began to take the standard couples in front if the castle shots. We posed for a few snaps in between all the photo bombing & drive-by stroller action. It was all so much fun, the show had been awesome and I was on a Disney high. Happy and satisfied, I was prepared to begin fighting my way through the masses to cash in our fast passes at Tower of Terror. Until… Joel said, “Wait.”

“Sam & Maddy will you stand over there and block people from walking through. I want to take one more picture.”

I watched as he started reaching into his pocket. This was it! 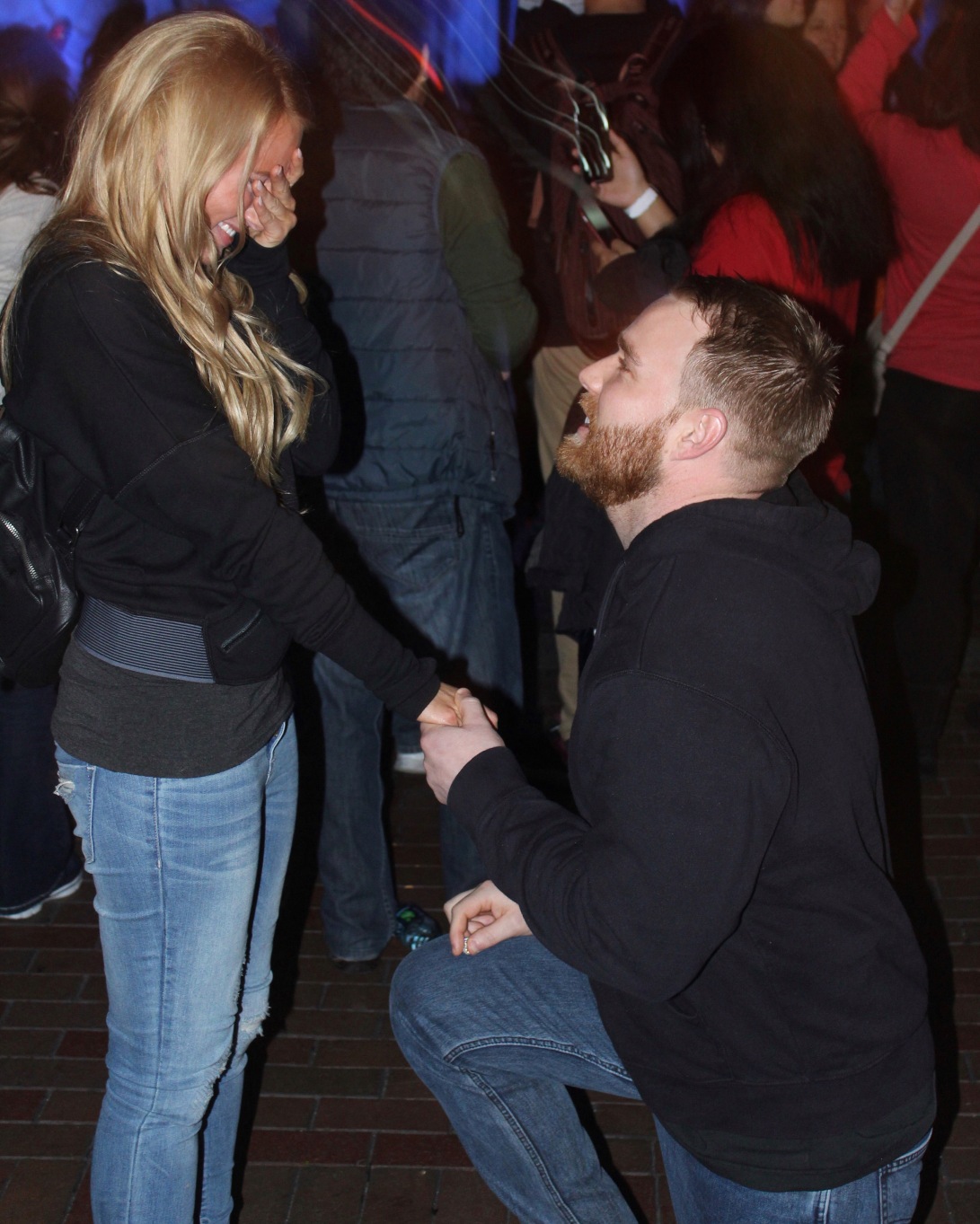 (Now I need to confess. On our walk into the park I had looked at the outside of his pockets hoping for any sign of a small box-shaped outline. I was fairly convinced that it was not there. Little did I know that he was carrying it loose in his pocket, brave guy. Smart too, he knows me well.)

I looked around for a moment as he started to get down on one knee. All at once, the busy crowd had come to a stop as everyone formed a circled to watch the action (only in Disneyland).  I saw my sister & brothers faces, they were as surprised as I was. He had kept the proposal a secret from my family, apart from asking my mom for her blessing earlier that evening.

Complete strangers were holding up cell phones, flashes were going off in every direction. It was as if we were part of the scheduled entertainment. A million thoughts were firing in my head at the same time;

“I can’t believe he is doing this in front of so many people!”

I looked again at my family watching and thought, “Wait. Why arn’t you all recording this?”

Joel was holding my right hand and he began to slip the ring on. His eyes were glassy, and I started to cry. “I don’t even know what hand this is supposed to go on.” he said laughing. I took my left hand down from covering my face and held it out. He said, “You’re my best friend, I love you, I want to spend the rest of my life with you.”

I was so excited that I jumped the gun, we went straight to him slipped the ring onto my finger. YAY! We kissed & hugged. A lady watching from the crowd yelled, “But what did you say?!”

Joel laughed and said, “I forgot to actually ask you! Will you marry me?”

I nodded my head, laughing and crying, then yelled back to the crowd “YES!”

My family rushed in to hug us, followed by strangers who began hugging us. Another lady stepped in to hand me a Disney button that read “Happily Ever After”, they really are on top of their game there.

Joel looked at my family, “She’s not my girlfriend any more! This is my fiancé!”  Music to my ears.

Looking back now… Was I surprised? YES! We had been dating for four years, and for the last two years a proposal was always in the back of my mind.  When it finally was the moment I was genuinly surprised. It’s like hoping that your team is going win the Super Bowl but it’s only day one of the pre-season. The championship is on your mind the entire season. When your team actually does win you can even say you “expected it”, but the truth is that you never really knew for sure. That’s the great thing about Hope, it makes reality that much sweeter.

I have wanted to get engaged in Disneyland sense I was 12 years old, never in my wildest dreams did I actually think it would really happen there! When really did, I was in shock. It was happiest I’ve ever been. Worth the wait. Best moment ever.